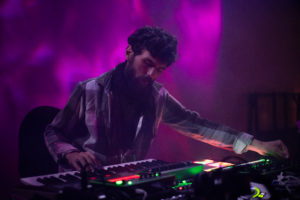 Celebrate the festival opening with us by listening to a short music set by Wael Alkak on YouTube!
Wael Alkak is a Syrian musician living in France. He opened the theater festival in 2019 with a generous set, blending tradition and modernity, popular and electronic music. His synthesizer-sounds and bouzouki melodies produce a transcendent style. Wael Alkak practices a multitude of instruments, such as bouzouki, percussion, saxophone and keyboards, as well as digital music.
To kick off this year's festival, we are sharing two of his recently recorded tracks!
'Janna' is a song that belongs to the pacifist demonstrators in Syria in 2011. Here you see Wael Alkak perform it during a concert in Paris in 2018.
Below you see the introduction of Wael Alkak's last concert, taking place at Urban Spree in Berlin, before the first lockdown. This concert was the release of his latest album, Alkak Live 2020!
Top photo: Istvan Virag.

On Thursday 11 March, we opened this year's festival with a welcoming speech by Artistic Director Anne-Cécile Sibué-Birkeland, followed by an introduction of our brand new Black Box teater Publication 6, presented by program dramaturg & editor Elin Amundsen Grinaker. Watch the opening below.