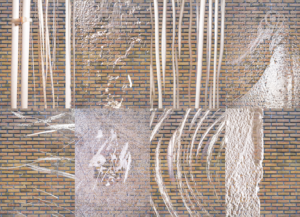 The work consists of a constant stream of images which carry traces of the diverse stories of the place. Images of marks that everyone who has worked in the building has a relationship with, images that are clear signs of theater production, images of neglected events, of valued events, intimate relationships, collective achievements, images of architectural details and historical events from before Black Box teater moved into the building. This flow of images brings a feeling of the theater out to the street and invites passers-by to reflect upon the inside of this creative environment.

Jakob Oredsson is an artist and architect who has created scenography for numerous performances at Black Box teater. Symbiotic Surfaces is Oredsson’s first solo work at Black Box teater, and is part of the artistic research project Scenography as Symbiosis at the Academy of Performing Arts, Østfold University College.