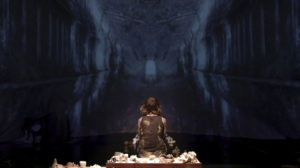 With every night in my dreams (early cameroon) Findlay//Sandsmark continue their  interest in examining ideas around personal origin and how a place can leave an imprint on  the body and the senses. This time the work takes impulse from the childhood of Marit  Sandsmark, reflecting on her first eight years of living in Ngaoundere, Cameroon where she  was born as a child of Norwegian Christian missionaries.

The small rural town of Ngaoundere is today the home for over a million people where  ninety percent are refugees from surrounding wars. The town, culture and people Marit  knew as a child has undergone overwhelming change and the global economic system we  live off continues to ravage Africa.

How does one recall one’s past, filled with so much love in the context of a void that feels  impossible and unapproachable, and at the same time seems so necessary to address and  understand?

In her essay “Troubling Time/s and ecologies of noThingness: Turning, re-membering, and  facing The incalculable” (2018), American theorist Karen Barad writes: “[T]o think through  what possibilities remain open for an embodied re-membering of the past which, against the  colonialist practices of erasure and avoidance and the related desire to set time aright, calls  for thinking a certain undoing of time; a work of mourning more accountable to, and doing  justice to, the victims of ecological destruction and of racist, colonialist, and nationalist  violence, human and otherwise – those victims who are no longer there, and those yet to  come. This task is related to rethinking the notion of the void”

The project was initially meant to include a research trip and exchange with Cameroon, but in the light of pandemic lockdown and imposed immobility outwards we made a journey inwards. The project found its starting point by imagining and exploring other possible ways  of relating by collectively addressing the void. During the process people of different ages and backgrounds were invited to take part in a meditation practice, using a strategy to  imagine how we can relate in non-physical ways. By removing the gaze, and working with  our eyes closed, our imagined state manifested itself in clay, becoming objects that  resemble all the different non-bodies and voices that shared this journey with us. The  performance continues this interest in sharing, and offers a collective space to acknowledge  and enter this impossible void by way of collecting multiple layers, memories and  fragments.

every night in my dreams unfolds as a performance installation with a choreographic  center, practicing the ability to listen and embody states explored through ritual and  hypnotic experience, finding their way into clay objects, circling and flickering lights and  shadows, patterns, shapes and colors, tactile sounds and not the least, in the body of the  solo performer as she negotiates and interacts with the landscape.

Findlay//Sandsmark (F//S) is a Stavanger, Norway based performance company  working across the disciplines of dance, theater, live music and video art in a  collaborative and collective effort. Over the past few years they have created several  productions in the borderland between performing arts and installation, bending  connections and correlations over disciplines to create live art which resonates from a  physical and emotional plane. In that brief time, they have made several large scale  performances including most recently- biograph, last year was pretty/shitty (2014), o’ death (2015/2016), (re)remember study (2016/2017), returner (2017),  lowlands (florida) (2019) and every night in my dreams (early Cameroon) (2021). This  work has been presented in regular collaboration in Norway with Black Box teater in  Oslo, Bit Teatergarasjen in Bergen, and Avant Garden in Trondheim, and internationally  at PS 122 Coil Festival and Abrons Arts Center in New York, On the Boards, Seattle,  Wexner Center in Columbus, and Charlotte Street, Kansas City. They are also behind the  platform/space RIMI/IMIR SceneKunst in Stavanger, Norway where they have a full  time production studio in an old boat factory/ grocery store as well as programming  guest artists.