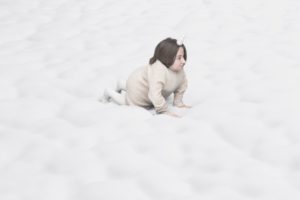 You aren’t the one interpreting me,
I’ll show you the way to understand me.
I take the responsibility to draw
the image that the world will have of myself.

What happens in collective imagination when a mythological figure emerges without a basic myth that justifies its existence? For centuries, the unicorn has changed its form from a pagan creature to a symbol of the pope, a magical healer and guardian of girls’ chastity, until it eventually became a pop icon. The unicorn, a creature without homeland and history, used and abused by humans, deprived of the right to speak.

In Seeking Unicorns, Chiara Bersani wants to do right by the unicorns’ grief. She will give them love, a story, a choice. Seeking Unicorns is designed for non-theatrical rooms where the unicorn tries to find itself in a new form and embark on a journey that will be different for each spectator.

Chiara Bersani is an Italian choreographer, stage artist and performer. She creates performances where the body is a testimony to lived history. Her works are about the body as a political unit, about clashes and encounters with society. During Oslo Internasjonale Teaterfestival 2021, you could experience her performative object Fionde, which was delivered to your own home.

Seeking Unicorns is presented in collaboration with Dansens Hus.
Presented in the framework of Aerowaves, co-funded by the Creative Europe programme of the European Union.
Norwegian premiere.
Duration: 45 minutes