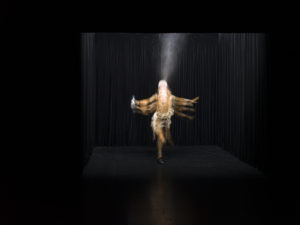 The Big Dream marked the 20th anniversary of the Norwegian Theatre company Verk Produksjoner in 2019. The starting point is a letter correspondence between two of Verk’s actors that has worked together for 25 years. They openly write about their longings and alternate effortlessly between large and small aspects of life. The gaze is directed towards a common energy field: the dream of what the theatre may contain, which has been the glue in their relationship. We sense the contours of something fragile and human as they try to capture their own chaotic and incomplete thoughts.

“Today I started to make a timeline of my life and my working relationship with you. I’ve known you for 25 years and we’ve made 25 to 31 performances together. So, I took a couple of depression tests – just because I was curious. Funnily enough, the results were positive even though I’m feeling the opposite of depressed.”

Verk Produksjoner is known for their epic and vaudeville-esque form of acting with satirical and political undertones changing swiftly between storytelling, acting and improvisation.

“The Big Dream is an embrace of a lifework, a tribute to the theatre and the illusions, to reach beyond one’s limits and to endure each other.” – Dagsavisen

“Form and content go hand in hand with strobe lights and black velvet curtains – a black disco of mournful movements. A disco of nothing.” – scenekunst.no