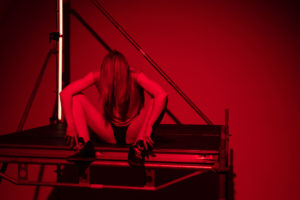 The Dancing Public is a solo performance by and with dancer and choreographer Mette Ingvartsen. The performance is a summary of the distinctive year 2020 that explodes in a mixture of intense movements and music that makes it difficult to sit still. Ingvartsen invites to a dance marathon where anyone who wants can join.

Are we ready to be high on life again? Do we need to get rid of the body’s spiritual waste after the ravages of the pandemic?

In a historical context, dance, in all its extreme and violent forms, has been a response to, among other things, disease and war. Ingvartsen calls out to the large crowds that come together in the streets to dance uncontrollably.

The performance looks back in time. At the same time it is a dance party and a concert that looks at how dance can affect the community after such a long time in isolation and closed, social arenas. Is there a gigantic, unsaturated need for movement in our bodies that needs to be vented? Close your eyes, feel for yourself and throw yourself into it.

Mette Ingvartsen is a Brussels based dancer and choreographer. She has previously presented the works 69 positions, evaporated landscapes and 21 pornographies at Black Box teater.

The Dancing Public is presented in collaboration with Dansens Hus.
Norwegian premiere.