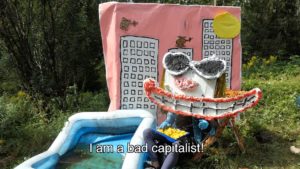 The grand opening of the Norwegian Opera and Ballet in Oslo took place in 2007, but one might not be aware of its unknown younger sibling, The Norwegian Opra, founded in 2009 by Trond Reinholdtsen.

Since its founding, 17 filmed episodes have been created under the title Ø. These will be possible to experience at Vega Scene during the festival. Ever since Ø conquered the internet, a group of viewing enthusiasts, a gang of idealized audience members, a true cult of precariat-proletariat of chosen ones that go under the name of “The Followers of Ø” has gathered together from all over the world. Former audience members of Ø have tried to interpret the world. Now, the task is to change it. At Oslo Internasjonale Teaterfestival,  they will have their first – and only – performance of The Followers of Ø: «To arms! To arms!» – an affirmative Oratory at Kulturkirken Jakob, commissioned by Konsertserien Periferien.

Trond Reinholdtsen is educated as a classical composer and singer. In his work, he is mixing references to lecture, documentary, performance and banality with his interest in narrative form, mathematical structure and communist propaganda.